The allrounder has been dropped for the first Test with Peter Handscomb taking his place.

The allrounder Mitchell Marsh has lost his place in Australia’s XI for the first Test against India at Adelaide Oval on account of his inconsistency, Tim Paine revealed Wednesday, but the team expects him to play a role across the series.

Marsh, 27, was not named in Australia’s team for the Adelaide Test with the recalled Victoria captain Peter Handscomb taking his place for what is his first Test since April.

Paine said Marsh’s omission was due to a lack of consistency and that would benefit from returning to Sheffield Shield cricket. In 30 Tests, Marsh averages 26.08 with the bat and 42.45 with the ball. He managed scores of 12, 0, 13 and 5 against Pakistan in the UAE and took two wickets.

“Mitch Marsh has not been as consistent as he would like and we would like,” said Paine at Australia’s pre-match press conference. “We know the talent that Mitch has and we know that most likely at some stage in this series we will need him. We know he’s good enough to be a great allrounder at Test level but hasn’t quite put it together at Test level yet.”

“As this series wears on and you get to places where the wicket is a bit flatter and conditions a bit warmer and bowlers a little more tired, he might have more of a role to play. We’ll send him back to Shield, get some more cricket under his belt knowing at some stage we’re probably going to need him.

“We obviously have a lot of confidence in Nathan Lyon bowling a lot of overs if we need to,” said Paine. “And probably the fact that all our three quicks go in real fresh. We have confidence in them, particularly at the start of the series. The (Adelaide Oval) wicket over the last few years here has given enough throughout the game.”

Australia team for the first Test against India: 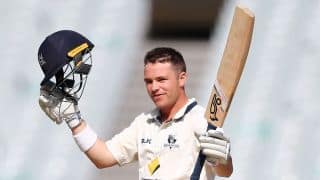 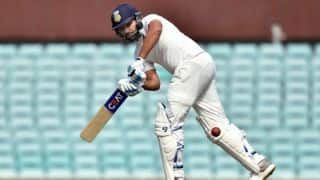