He said it was important for the team to get the top order out soon to take an early advantage.

“We have got some fantastic players. We have got a fantastic support staff behind us. They do a fantastic job. I think the most important thing is that we prepare every time we go out to play. As long as we prepare well and turn up, we will be able to win,” he told reporters after MI thrashed the Hyderabad side by nine wickets last night. READ: Rohit Sharma says Mumbai Indians will play fearless cricket in playoffs

He said it was important for the team to get the top order out soon to take an early advantage in the match. The Mumbai side broke the back of Hyderabad innings by getting its openers — captain David Warner and Shikhar Dhawan — out in the first two overs of the innings.

“I was bowling to the big boundary. David [Warner] is a great puller of the ball, great striker of the ball. I took a chance. It could have gone for a six. It could have taken a wicket. It’s just one of those things. In matches, you need to take a chance,” he said.

McClenaghan expressed happiness at getting the opportunity to play a key role for the Mumbai Indians.

“What I really enjoyed is the opportunity to show Mumbai what I do back home and in domestic cricket. When I got the chance, I showed my variation…capabilities at different deliveries and different times of the innings,” he said.

He lauded Hardik Pandya, who has been a promising young player for Mumbai this season, as one of the best with an attitude to play well even in tough situations.

Meanwhile, Sunrisers Hyderabad coach Tom Moody was disappointed with his side for failing to click on the day when the play-offs berth was at stake.

“It’s a disappointing way to finish our campaign. Whether you lose by one run or 100 runs, it’s a bitter way to finish the tournament. We, unfortunately, did not turn up as a batting group. The wicket was a good batting wicket. We could have got to 160 mark, but losing as many wickets as we did early on puts enormous pressure on the middle order,” he said.

He rued the defeat against Royal Challenge Bangalore (RCB) in a rain-curtailed match on May 15. “The stars are not aligned in our favour. The clouds are (referring to the rain-hit match) here in Hyderabad,” Moody said.

Moody said despite the early exit, the team gained many positives from the tournament, including the good form of openers Warner and Dhawan and the all-round show of Moises Henriques.

“We did not have the momentum [last night] that we had in the previous games. It was one of those days that we just did not click,” he said. 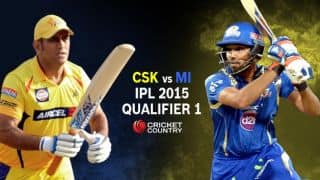