MS Dhoni fell after scoring a brisk 40 off 46 balls and Ravindra Jadeja fell for a duck off Mitchell McClenaghan as India lost their two wickets in quick succession in chase of 293 in the first One-Day International against New Zealand at Napier.

Dhoni struck two boundaries and as many sixes to score 40. He added 95 runs for the fifth wicket for India, which revived India after they lost wickets in quick succession.

Earlier, Virat Kohli has scored his 18th One-Day International (ODI) ton as India are chasing 293 against New Zealand at Napier. At the end of 38 overs, India are 190 for four.

India were troubled by few quick wickets, Kohli held firm throughout. As the batting powerplay came, he went on to unleash an array of aggressive strokes to get into the groove. The asking rate had risen tremendously, but Kohli caught on with that display. 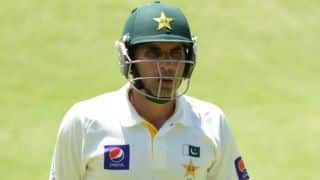