In the historic pink ball game Santner made 31 and 45 runs respectively, along with figures of 2-62.

Former New Zealand all-rounder Jacob Oram confident about Mitchell Santner, and predicts that he will play for a good amount of time in the Test. The 23-year-old player proved himself in his test debut, as an all-rounder in the first ever day-night test at Adelaide. In the historic pink ball game, Santner made 31 and 45 in the low-scoring test and rounded- up the match with figures of 2-62. “We saw with young Santner in Adelaide that he has got huge skill with both bat and ball,” said Oram, who played 33 tests, scoring five test centuries and took 60 wickets to his credit. ALSO READ: New Zealand retain Mitchell Santner for 2-Test series vs Sri Lanka

“It was a big ask to debut in such a high-profile test, but I think he came through it really well. He is a spin bowling allrounder but he gives you that balance with both bat and ball. What I saw out of his batting was really positive,” added Oram. First time Oram saw Santner was when Stags played the Knights and Santner managed a lot of runs in the domestic competition. “I saw a guy last year with immense skill, but it is a huge step up to test cricket and he has made that step up very well. It all bodes really well for the future,” as reported by stuff.co.nz.

Oram, the bowling coach for the Central Stags said, “I saw a guy last year with immense skill, but it is a huge step up to test cricket and he has made that step up very well. It all bodes really well for the future.” The possiblity of Black Caps coach Mike Hesson playing two spinners will be determined by the circumstances. “We very rarely played two spinners in my time, but if Santner is good enough to be batting at No 6 then why not play him?. “It means you can play three or maybe even four specialist seam bowlers, below BJ Watling at No 7 with a spinner at 6. Or if it is a bit drier you could play the three seamers and two spinners with Mark Craig. Santner needs to do a job at No 6,” added Oram. ALSO READ: Dhammika Prasad ruled out of Sri Lanka tour of New Zealand 2015-16

Speaking about Craig, the side’s first-choice spinner is says that he is a good fielder and he bats at an average of 37. As per Oram, Santner will make the Black Caps Test team stronger in quest to defeat Sri Lanka at home. “An allrounder full stop is really important to any side,” said Oram, “If you can find anyone who can do both skills they are like bloody gold dust in a cricket team,” explained Oram.

New Zealand team had a lot of quality all-rounders,  Oram’s with him had  the likes of Daniel Vettori, Scott Styris, James Franklin and Grant Elliott on his side. “New Zealand cricket has been blessed with quality allrounders but when you find someone who can do both skills really well in the most important format test cricket then they are the guys you have got to hold onto because they have something special.” 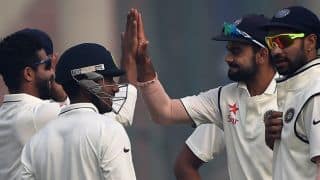