Mitchell Starc (5 for 34) brought back the dreadful memories of his forerunner Mitchell Johnson from the 2013-14 tour of South Africa to bowl Australia to a 189-run lead in the first Test at Durban.

Mitchell Starc (5 for 34) brought back the dreadful memories of his forerunner Mitchell Johnson from the 2013-14 tour of South Africa to bowl Australia to a 189-run lead in the first Test at Durban.

Starc used reverse swing bowled from around the wicket and made the ball move away from the right-handers. He later accounted for the left-handed tail-enders, Kagiso Rabada and Morne Morkel with full deliveries bowled from over the wicket.

South Africa s last four wickets fell in 14 balls as they collapsed to 162 with AB de Villiers being a spectator at the other end. It was a shambolic show from South African batsmen as one of them just had to support de Villiers, who was eventually left stranded on 71. De Villiers batted for almost three-and-half hours and his innings was laced with 11 boundaries.

Responding to Australia s 351, South Africa kept losing wickets at regular intervals. Dean Elgar s woes against off-spin continued as he fell to the guile of Nathan Lyon, who was brought into bowl in the eighth over. Lyon, bowling with a relatively new ball, came round the wicket and got the ball to straighten and the left-hander spooned a catch back. Lyon struck again in the eighth over, dismissing the mighty Hashim Amla for a nought, having him caught at bat-pad.

Aiden Markram looked good for his 32 but couldn t convert his start. Pat Cummins banged it in short and Markram gave away a simple catch at the stroke of tea.

Skipper Faf du Plessis showed aggressive intent but was removed by Starc and so was Theunis de Bryn. South Africa lost half their side with 108 on board.

De Kock and de Villiers paired up to add some stability, adding 42 for the sixth wicket before the former was cleaned-up by Lyon at the team score of 150.

From 150 for 5, South Africa in a matter of 40 balls, lost the other half of the side, adding just 12. Starc polished off the tail handing Australia a lead of 189.

Australia resumed their innings on Day Two at 225 for 5. Kagiso Rabada removed Tim Paine early in the day and Cummins, who showed enough resistance for 10 overs, fell to Keshav Maharaj for a 38-ball 3.

Starc joined Mitchell Marsh and produced some stunning fireworks before falling for a 25-ball 35 before lunch. Mitchell Marsh, who had got to his fifty, exploded after lunch but missed his hundred by four runs, falling at mid-on off Vernon Philander.

Maharaj was the most impressive South African bowler, finishing with 5 for 123 from his 33.4 overs. 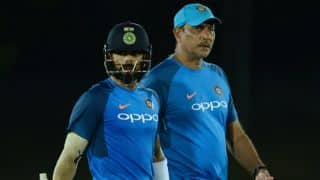