"Root and Cook are their two guys that are quite experienced and their two key batters." - Mitchell Starc

Ever since Andrew Strauss retired, Alastair Cook has had 12 opening partners. Gary Ballance has been in and out several times. Captain Joe Root has even tried batting a different positions. In other words England have tried many things to hide the chink in their armoury. Stressing on the same, Mitchell Starc said that England batting is not as mighty as it once was.

Batting, the chink in England’s armour

“They re certainly not as settled in the batting stakes as they were a little while ago,” Starc told The Unplayable Podcast. “Root and Cook are their two guys that are quite experienced and their two key batters. They re trying a few guys there at the top with the last couple of series so you don t really quite know who they re going to bring to Australia yet. It will be interesting. It s a nice one to watch for the bowlers. We re a more settled side than they are at the moment. Their batting line-up is one we can look at to exploit in our conditions.”

Beware of Anderson and Broad

England need not worry if their batters fail. They have James Anderson and Stuart Broad, who are nearing the 500-wicket club. If anything, Moeen Ali has been at his best. Let us not forget the rampant Ben Stokes. “England will rely a lot on their bowlers who come to Australia and have played a lot in Australia before. That s the most dangerous part about their team with guys who have taken a lot of wickets, home and away as well.”

Starc is not a part of the team who is in Bangladesh for 2 Tests. He has been rested to recover from his foot injury. He wants to take his time to be in the best of his fitness.

“The big series is the Ashes this summer so I don t want to go into that carrying anything small or coming back too early for an Indian tour.”

The arch-rivals will be seen battling against each other in Ashes 2017-18. 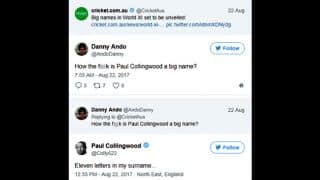