Pat Cummins says fellow Australia fast bowler Mitchell Starc's heel injury could lead to a lengthy spell away from the game if not treated properly ahead of Tuesday's fourth Test against England.

Pat Cummins says fellow Australia fast bowler Mitchell Starc‘s heel injury could lead to a lengthy spell away from the game if not treated properly ahead of Tuesday’s fourth Test against England.

Cummins rated Starc a “50-50” chance of overcoming a bruised heel to play in Melbourne, but selectors have already indicated they will take no risks with the Ashes series already won.

Cummins, who suffered a similar foot injury following his Test debut in 2011 and was out of action for more than four months, said Starc was keen to play in what would be only the second time in the showpiece Melbourne Cricket Ground Test.

Also complicating the issue is a four-Test tour of South Africa in the new year, with the Australians reluctant to risk their pace spearhead and 3-0 up in the five-Test series.

“The injury is not super common, but if it’s not treated well it can drag on for a very long time,” Cummins told reporters on Saturday.

“It’s a bruise pretty much where you’ve got to walk all day and bowl.

“I’m sure they’ll (selectors) come to an agreement and if he knows he’s not right, he’ll put his hand up.

“I chatted to him about it. I had a similar one and it’s one of those where there’s no way around it. You can’t strap it differently, you can’t bowl off the other foot or anything. It’s hard to hide.

“So (you have to) try and get it early enough and not try and really damage it. It can be a long process trying to get it right.

“He knows that, the staff know that and I’m sure they’ll work it out.”

Starc, wearing a compression sock on his right ankle, did not take part in Australia’s training on Saturday.

He spoke with coach Darren Lehmann and selector Greg Chappell at the ground and also conferred with the team doctor and physio.

If Starc is ruled out, Jackson Bird is expected to play his first Test since last year’s Boxing Day Test against Pakistan.

With the Ashes regained, Cummins said ensuring Starc was fit for the key Test series against second-ranked South Africa in March was front of mind for team management.

“I’d say that’s certainly the thinking of a lot of people: the selectors, the skipper and everyone around him,” Cummins said.

“He’s doing everything he can to get right. He’s been on crutches the past few days to try and take some weight off his heel.

“He hasn’t tried to bowl yet … I think in the next couple of days we’ll assess that.”

Bird has been part of the Test squad this year but couldn’t break into the team when Starc broke down during a tour of India and when Josh Hazlewood suffered a side strain during a series in Bangladesh.

“I have to prepare as if I’m going to play and be ready to go if any of those guys don’t come up,” Bird told reporters on Saturday.

“I’ve been ready to go for 12 months basically.”

Wicketkeeper Tim Paine is yet to join the squad after his father-in-law suffered a stroke but he is expected to be behind the stumps for the Boxing Day Test. 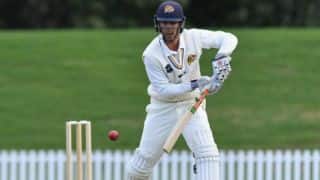