The pre-BCCI days for Indian Women's team were full of struggles.

The pre-BCCI days for Indian Women’s team were full of struggles. It is only now that the women cricketers are having their moment under the sun; otherwise, they have never enjoyed the fame and riches as their men counterparts did. Indian Women’s team captain Mithali Raj on Saturday recalled the hardships and revealed that as a national player she had travelled unreserved in a train.

“There were a lot of struggles in my journey. Now we are under the BCCI, but that time (when women cricketers were not under the board), the normal basic facility which a sports person gets to play even (we did not get). As an India cricketer, I have travelled unreserved from Hyderabad to Delhi by train,” Mithali remembered at a session of We The Women initiative which was moderated by Barkha Dutt.

To this, Dutt quipped, “That would never happen to a man.”

Mithali was quick to add: “That’s what Rahul Dravid said. He said he has never travelled in train as an India player, but I did. But those difficulties make us strong. As women we face so many challenges at an early stage, that when we mature and take up the challenges, we become so strong mentally, that we can do so many things, that we ourselves don’t believe that we are capable of.”

Hardships for taking up the sport

The train journey came much later. The perception goes that cricket is not a girl’s sport. Mithali recalled that her grandparents were not comfortable when she took up sports.

Asked if people opposed her, Mithali said “Very much, because I am from South India, my grandparents were not comfortable that I was playing a sport (cricket). My parents had to bear a lot, but they have cocooned my life in a such a way, that I did not have to deal with the negativity.”

Mithali, who led the Indian Women’s side to the final of the 2017 World Cup, presented an award to Iqra Rasool, a budding cricketer from Jammu and Kashmir. Iqra is training in Bengal to be a pacer.

Mithali’s male counterparts still continue to pocket moolahs and fame. In fact there is no comparison. Despite the success of the 2017 World Cup, India Women’s team have not played a game since. India lost to England in the tournament final and it was nailbiter. It has been almost five months since the women’s team have played. Meanwhile, in the same time span, their men counterparts have played 2 Test series, will start their fifth ODI series on Sunday and have also completed 4 T20I series. 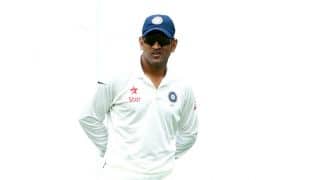