With Indian women climbing the ladders of success in the cricketing world, most of their success till date have come in the shorter versions, Twenty20 Internationals (T20Is) and One-Day Internationals (ODIs). However, Indian skipper Mithali Raj feels that the ultimate challenge of producing world class players would only come if the women start playing more and more Test cricket. As of now, England and Australia are the only two sides who play regular Test cricket in the form of Women’s Ashes, while the other teams mostly play the limited-overs format. As for India, they have only played five Tests in the last 10 years. India Eves felicitated by Sports Minister Vijay Goel

“Test matches are the ultimate test for cricketers, whether it is your temperament, skill or endurance. However, women’s cricket needs promotion and so far it has been done mainly through T20s and ODIs by the respective cricket boards. As of now, it seems every board wishes to market the sport through T20 and ODIs as they think they are the ideal formats. I feel Test matches should be played as frequently as limited over games because it churns out quality players. If the Indian team wants to play, the other teams should also be ready to play Test matches,” said Mithali. Mithali Raj: It is for BCCI to decide on women s IPL

“I am one of those players who have seen days before the BCCI took over and after that as well. I am fortunate that I continued to play. Today I am seeing this phase in women’s cricket, the reception we have got has been overwhelming. I clearly remember, despite doing well in 2005 World Cup, we never had this kind of a reception. It is a nice feeling after what we have all gone through, we feel wanted, feel appreciated for the effort we have put in all these years,” she added. They blue our minds: Amul on India’s campaign in ICC Women’s World Cup 2017

“A special mention to the Indian railways for supporting us and extending jobs to the girls. If it was not for the Railways, many more talented cricketers would have quit the game to focus on getting jobs for financial security. Not many gave us a chance to reach the semis or final. What the team has achieved in this World Cup, the seeds were sown in the ODI series against Australia, the West Indies tour, the Quadrangular Series in South Africa, the Qualifiers in Sri Lanka and into the World Cup. The preparation was very good,” she concluded. Mithali: Overwhelming to see such kind of reception for INDW

Apart from Mithali, batter Harmanpreet Kaur too said that consistent good performance would allow the women to make a name for themselves. “It is only when you do well, you are recognised. This is exactly what has happened. It is a big achievement to play the final, considering we did not do well in the earlier editions,” she said.

“Playing Big Bash was a very big achievement for me. I learnt a lot there and that helped me a lot in the World Cup. I hope more Indian players get the opportunity post the World Cup. It has only been Smriti Mandhana and myself so far. If women’s IPL happens, other countries’ players will come and play here, and sharing the dressing room with international players will be a big confidence booster to the the local players,” she concluded. 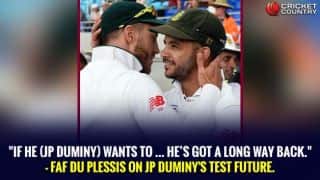