India's pace spearhead Praveen Kumar has been ruled out of the first three ODIs against the West Indies, starting Tuesday. 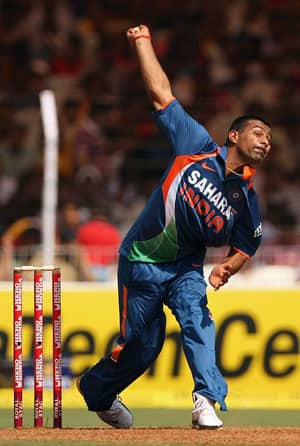 India’s pace spearhead Praveen Kumar has been ruled out of the first three ODIs against the West Indies, starting Tuesday.

Earlier skipper Virender Sehwag during the pre-match conference had said that Praveen had “niggle” and expected to be fit for the second ODIs.

But in absence of Praveen for three ODIs, the bowling responsibility will fall upon the young shoulders of R. Vinay Kumar, Umesh Yadav and Varun Aaron, who were impressive against England in the last series.

Karnataka fast bowler Abhimanyu Mithun will replace Praveen, who is out with a chest problem.

Off spinner Ravichandran Ashwin will look to continue his sensational run against the West Indies, having made a dream Test debut with 22 wickets in three matches against the visitors.

Left-armer Ravindra Jadeja, who played some crucial knocks with the bat against England, will be the other spinner.

Jadeja is having a good time with the bat too and scored a triple century against Orissa in the Ranji Trophy.

India will be without their regular skipper Mahendra Singh Dhoni, who has been rested ahead of next month’s long tour to Australia. Virender Sehwag will lead the team and Parthiv Patel will keep wicket in his absence.

His absence notwithstanding, World champions India would hope to continue their dominance of the shorter form at home.

India whitewashed England 5-0 last month and would be looking for an encore. However, the hosts would not take the West Indies lightly as they have shown enough resilience in the Test series.

Sehwag did not play in the ODI series against England and would be eager to make an impact. He has led the side in seven matches and won four.

West Indies may have lost the Test series 0-2, but they gave a good account of themselves in patches. In two Tests, Delhi and Mumbai, they had the first innings lead, but their propensity to collapse will be something they have to guard against.

The team will look up to Darren Bravo in batting as the flamboyant left hander has scored heavily in the Test series.

The addition, all-rounders Kieron Pollard and Andre Russell will boost the side. (IANS)