England‘s flamboyant all-rounder Moeen Ali, who has had a good day out in the fifth and final test against hosts India at the Wankhede Stadium in Mumbai since Friday, went on to disrespect former Indian Test cricketer Aakash Chopra on Twitter on Saturday. Aakash tweeted the link of an article from ESPNCricinfo stating, “You just can’t hit your way out of a bouncer-trap. #Demo of lessons from the Moeen Ali dismissal for @espncricinfo,”” to which Moeen responded by stating, “@cricketaakash @espncricinfo Thanks for your opinion mate.” Moeen Also went on to disrespect Aakash by reminding on how much did Aakash play for India.

However, Moeen immediately went on to delete the tweet, and later came up with an apologetic tweet to Aakash, while earlier, Aakash had tweeted to his reaction stating, “You’re most welcome, brother. Glad that the only bit you didn’t like in the piece was my career numbers .Well done on the 2 100s. Go well,” as Moeen responded by stating, “@cricketaakash @ESPNcricinfo Thanks. I apologise. Was no need for it.” Following this incident, the other members on Twitter reacted to this tussle between the two. Many reminded Moeen of Aakash having over 10,000 runs in First-Class cricket, and also dared him.

@cricketaakash @ESPNcricinfo Thanks. I apologise. Was no need for it.

Few other reactions stated that to be a commentator or analyst, one need not require to be a great to play the game, while also reminding that it was disrespectful on Moeen’s half. Another member stated by reminding Moeen about his class, and also stated that he was blind, apart from warning him, that he would eventually return form the Ashes tour in 2017 as an ex-England cricketer. 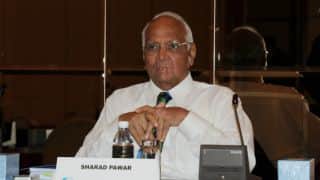