The England and Wales Cricket Board (ECB) on Wednesday released Moeen Ali and James Porter from the 13-man Test side for the opening game to take part in this week’s domestic T20 matches for their respective counties, according to reports.

Off-spinner Moeen, who plays for Worcestershire was overlooked over leg-spinner Adil Rashid when the England management named the playing XI for the ongoing first of the five-match Test rubber here.

Moeen will now play in two back-to-back games — against Durham at home on Friday and away to Nottinghamshire at Trent Bridge on Saturday.

Porter, on the other hand, will return to the Essex side for two consecutive games against Kent at Canterbury on Thursday and at Taunton against Somerset on Friday. 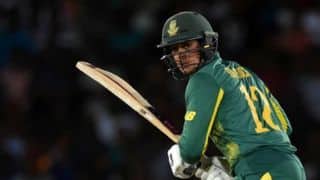