Although there are question marks over his Test future, he remains an important cog in England's wheel as far as their white-ball plans are concerned.

Allrounder Moeen Ali has requested England Cricket Board (ECB) for a break in Test cricket after being dropped from the England team and losing his all-format central contract. Moeen will miss England’s two Tests in New Zealand in November and could be left out from the Test squad against South Africa in December in January.

Although there are question marks over his Test future, he remains an important cog in England’s wheel as far as their white-ball plans are concerned.

“It’s just to get away from it a little bit. I feel like I want to enjoy my batting and this will give me a bit of a break,” Moeen told ESPNCricinfo about his decision.

“I want to spend some time with the family. I’ve been playing for England for five years and it’s been quite tough. The intensity is obviously higher in Test cricket so this is just to give me a break and then we will see what happens after that.

“I’m not ruling out playing Test cricket in the future. I’ve had long chats and thought about it quite a lot. I just want to give myself a bit of time to refresh my batteries and see where it goes after that.”

Meanwhile, ECB Director of Cricket Ashley Giles stressed that Moeen’s decision does not spell the end of his 60-Test career. “For all the guys, not just Moeen, it’s been a really challenging summer,” Giles said.

“A World Cup and an Ashes back-to-back has had a massive effect on many of these guys psychologically, as much as physically. And some of those guys are still carrying (those issues), one of them being Moeen.

“His experience in the first (Ashes) Test wasn’t a great one, but that’s cricket. He’s has been a great servant for his team. And that’s why I encouraged him to leave that option open to come back. He might just need to go away and freshen up. But he’s been a really good servant for this team. And he’s still relatively young.”

England are also scheduled to tour Sri Lanka for two Tests in March and April, a country where Moeen last year claimed 18 wickets at 24.50. But with Jack Leach establishing himself as the first-choice spinner, Moeen’s decision may come with equal risk.

“The two Tests in New Zealand are not part of the World Test Championship, but actually they form a really important part of the build-up process to South Africa, which is a series that we’ve got to go and win,” said Giles.

“And New Zealand are a strong team. We are not going there lightly, so we’ve got to be ready.”

Giles insisted that Moeen’s decision has nothing to do with the Indian Premier League.The Sri Lanka tour falls close to the start of the 2020 IPL, a tournament for which he plays for Royal Challengers Bangalore (RCB). “It is going to be very difficult for us to stop players going (to the IPL) without risking losing them,” Giles said.

“We’ve got to accept that and manage our players outside that. They have to be reasonable in accepting we are making space for them, because their main duty is to represent England. But that window [in the schedule] is left open for them for a reason.”

“These are extraordinary circumstances, and some players deal with it better than others,” he said.

“Some players are in different cycles of their own game, and where they are in terms of confidence – look at where [Ben] Stokes has been all summer compared to Moeen – but we’re going to support these guys to come back into the side. Our whole system has got to be better at picking them up and making sure that they’re better prepared for the rigours.” 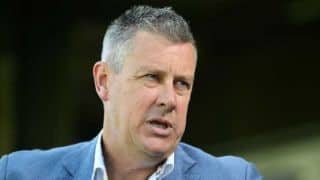