Rajkot: After putting England in the driver’s seat with a defining century on Day Two of the opening cricket Test against India, middle-order batsman Moeen Ali on Thursday urged the visitors to be patient when they walk in to bowl on Friday. Resuming the day at 311 for 4, England went on to make a mammoth 537 before being bowled out with three of their batsmen Ali (117), Joe Root (124) and Ben Stokes (128) hitting brilliant centuries. In reply, India reached 63 for 0 at stumps at the Saurashtra Cricket Association Stadium. With the Indian spin trio of Ravichandran Ashwin, Ravindra Jadeja and Amit Mishra sharing six wickets in the first innings, Ali felt that the pitch offered good spin for the England’s spinners in the 11 overs which he, Zafar Ansari and Adil Rashid bowled. Full Cricket Scorecard: India vs England 1st Test at Rajkot.

Ali, who traumatised the Indians with his gentle off-break during their 2012-13 tour, said England will need to hit the correct areas when they come in to bowl on the third morning of the match. “They obviously played quite well towards the end. Thought there was good spin and nice reverse in the middle so that would be helpful tomorrow. The slower balls spun a bit more than the rest but the build up to that ball has to be good,” he said after the second day’s play. “We need to bowl in the good areas and wait for the pitch of do the rest. Need to stay patient which is something Saqlain talks about as well,” he added. Ali, who was unbeaten on 99 at stumps on the opening day, went on to add another 18 runs to his name besides registering his career’s fourth ton. The southpaw, however, conceded that he approached the knock with the team’s cause in mind.

“Before going in to bat, I wasn’t feeling great, I was feeling a bit lethargic. I wasn’t moving my feet too well yesterday and the singles were there for me to take but I just played the situation,” he said. “I thought of getting it [century] yesterday but was happy to have got it today. I slept well, wasn’t too fussed and was happy to contribute to the team’s cause. There were times I wanted to have a hack but I have been trying to practice as much as I can.” The 29-year-old also praised his nemesis Mohammed Shami, who managed to break through the left-hander’s defence. India vs England, 1st Test: India reply solidly after England pile up 537

“He was bowling well and I thought I needed to see him through. The mindset was negative probably but I find him [Shami] quite hard to face,” he said. 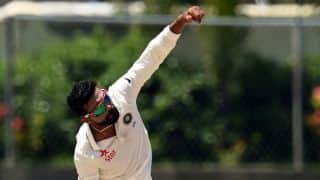