Moeen Ali was the last man dismissed, falling for a score of 61 to Morne Morkel.

England were bowled out for 342 in their first innings, conceding a 133-run lead to South Africa on Day Three of the fourth and final Test at Centurion. Kagiso Rabada was the destroyer-in-chief of the English batting order, taking seven wickets for 112 runs from 29 overs in his best display in a Test innings in his brief Test career so far. Rabada also became the youngest South African bowler to take seven wickets in a single innings, beating the record previously held by Hugh Tayfield by over a 100 days. Moeen Ali‘s entertaining 61 off 101 balls was the chief reason for England avoiding a follow-on, as well as cross the 300-run mark, hammering 11 boundaries during his stay at the crease. LIVE CRICKET SCORECARD: South Africa vs England 2015-16, 4th Test at Centurion, Day 3

England were off to a shaky start when struggling opener Alex Hales was dismissed for a 14-ball 15 after smacking three boundaries. Skipper Alastair Cook then steadied the innings with an exquisite selection of shots, displaying good form in the ongoing series for the first time. Nick Compton, who had a good run in the first couple of Tests, was unlucky to be trapped lbw at shin height by a short delivery from Rabada that stayed low. The dismissal barely stopped Cook, as he brought up his 47th Test fifty soon after, and added 60 for the third wicket at the end of the second day, with England cruising at 138 for two. LIVE CRICKET UPDATES: South Africa vs England 2015-16, 4th Test at Centurion, Day 3

The third day saw Cook and Root depart on identical scores of 76, with the former still another 51 runs away from becoming the first English batsman to score 10,000 Test runs. Rabada delivered one of his best spells across formats to reduce towards the closing stages of the first session, with the visitors losing three wickets for just three runs within 15 minutes. England would have been bowled out for less than 250 had it not been Ali innings with vital support from Ben Stokes (33 off 29 balls). 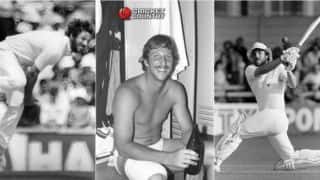