The Pakistan Cricket Board feels that Mohammed Aamer should seek pardon from the ICC instead of appealing against his five-year ban imposed on him by the world governing body. 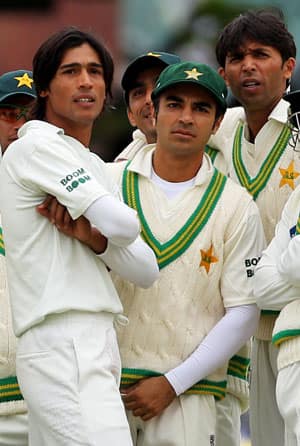 The Pakistan trio of Mohammad Aamer (L), Salman But (C) and Mohammad Asif were found guilty in one of the biggest scandals that rocked cricket last year Getty Images

The Pakistan Cricket Board feels that Mohammed Aamer should seek pardon from the ICC instead of appealing against his five-year ban imposed on him by the world governing body.

“We don’t know if he has already filed an appeal with the international court of sports arbitration or will file it now.

But certainly we believe he has a better chance of getting his ban reduced if he keeps quiet for a few months and than directly approaches the ICC for clemency,” one official source in the board said.

Aamer was released from a young offenders’ institution last week near London after he completed three months of a six month jail sentence for his role in the spot-fixing scandal in 2010.

The left-arm pacer still has to complete the five year ban that was imposed on him and two other Pakistani players, Salman Butt and Mohammad Asif in February, 2011 for the same offence.

The source said that the PCB s legal department had already informally contacted the ICC about possible rehabilitation of Aamir.

“The ICC could consider reducing his ban but obviously if Amir goes into appeal than he will also lose this strong chance of getting his ban reduced. Because players who are sentenced for corruption related offences usually don t get much sympathy by the CAS,” the source noted.

When contacted the PCB s legal advisor, Tafazzul Rizvi said that while the board was monitoring Aamer s case but since he was banned for a corruption offence he came directly under the preview of the ICC anti-corruption code.

Rizvi pointed out that before 2005 home boards were responsible for dealing with players accused or convicted of corrupt offences.

“But since 2005 after the new ICC anti-corruption code came into being all matters related to it are handled directly by the anti-corruption and security unit,” he said.

Rizvi said that under clause 6.7 of the ICC anti-corruption code any player who has completed his period of ineligibility has to complete an anti-corruption rehabilitation and education program and also has to be monitored to the satisfaction of the Anti-Corruption and Security Unit (ACSU).

He added that the rehabilitation and education program has to be held to satisfaction of the ICC anti-corruption unit.

Rizvi said the board also favoured having the youngster go through a proper rehabilitation and education program and to keep him under close monitoring at all times.

Another source said that the PCB was also contemplating directly asking the ICC to allow it to start the rehabilitation and education program for Aamer as soon as possible so that he stands a better chance of getting his ban period reduced. (PTI)