Former Indian captain Mohammad Azharuddin wants current India Test skipper Virat Kohli to not shuffle and move in the crease to much.

Former Indian captain Mohammad Azharuddin has advised current India Test skipper Virat Kohli not to fiddle around the batting crease too much, which he had done the last time Team India toured England. Kohli looked completely out to sort and was often dismissed played outside the off stump line. Pakistan’s Younis Khan after scoring his sixth double ton at The Oval against England last week, credited Azharuddin for his show. Azharuddin had advised Younis to bat inside the crease and counter any swing which was available to the bowlers. Kohli is currently leading India in the fourth and final Test against West Indies at Port of Spain.  Full Cricket Scorecard: India vs West Indies, 4th Test match

In an exclusive interview to IndiaToday Azharuddin was quoted, “The the best way to counter swing and pace is to allow yourself little more time. And if you stand back inside the crease it allows you a little more time against faster bowlers where you can adjust your backfoot play. And I can tell you the difference in those two-three yards help you play swing better because you know by then how much is it going to swing. Azharuddin went on to add that, “Virat is a great player but I saw him struggle a bit in England in 2014 when he was unsure about the swinging ball outside off. These days batsmen aren’t exposed to much swing bowling but every great batsman like Virat will know how to adapt in different conditions. I hope he gives a thought to this change because the swinging ball is probably the only thing left for him to conquer and by standing outside the crease, I feel he is only cramping himself.” ALSO READ: Younis Khan and the art of batting with the tail

Speaking about the advice he gave Younis, Azharuddin said,” What I told Younis was based on my own experience. I told him he was such a great batsman but by jumping up and down he appeared pale shadow of a batsman with 31 Test centuries to his name. Credit to Younis for listening to me and them applying that to his batting at the Oval.” 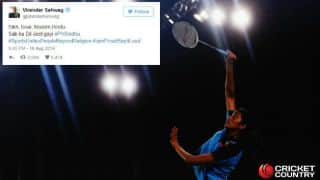