The former Indian skipper is working as hard as anyone else associated with the film to make it a success.

Former India captain Mohammad Azharuddin has been in London where the unit of his upcoming biopic starring Emran Hashmi is busy shooting, and the cricketer is leaving no stone unturned from his end to make sure that everything is all right. Azharuddin, who played 99 Tests for India and is one of the country’s most favourite as well as a successful captain, has been rolling the pitch roller as well as providing crucial inputs to the film unit. The first look of the film was released earlier this year and there is absolutely no doubt that the Indian fans would be eagerly waiting for the release of this film. ALSO READ: MS Dhoni’s biopic to release on October 22

According to HT Cafe, the former skipper is working as hard as anyone else associated with the film to make it a success. “Azharuddin is so involved in the project that he does jobs like rolling the roller to flatten the surface of the cricket pitch, making sure that the pitch is dry, etc. He wants to ensure that the film’s crew does not face any difficulty,” a crew member of the film said. ALSO READ: Mohammad Azharuddin to be honoured by Derbyshire

He continued, “He reaches the sets early to check how the pitch has shaped up. We also rush to him for any advice on cricket.” The report added that while the cricketer remained unreachable, the spokesperson of the film confirmed.

Sameer Nair, who is the group CEO of Balaji Motion Pictures —  the makers of the biopic on Azharuddin — said in a statement, “Azhar marries two of India’s greatest passions – cricket and films. The collaboration with MSM Motion Pictures further strengthens the pitch we’re playing on. Both studios will bring their strengths to the fore and play this film on a front foot.” 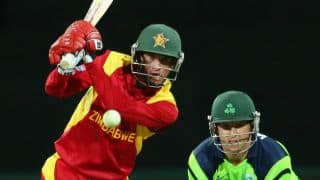 Ireland to play three ODIs in Zimbabwe in October, 2015