Asaduddin or better known as Abbas is a left-hander, who was a part of the Hyderabad U-22 squad.

The Uttar Pradesh senior One-Day squad that will take part in the Vijay Hazare Trophy today saw former India captain Mohammed Azharuddin‘s son Mohammed Asaduddin being included just after appearing for trials at the state team’s nets a week back.

Asaduddin or better known as Abbas is a left-hander, who was a part of the Hyderabad U-22 squad, back in 2010, but could not break into the senior squad in these years. Asaduddin also gave trials in various IPL franchises including Kolkata Knight Riders (KKR) back in 2009 without much success.

It must be mentioned in this regard that Asaduddin appeared for state team’s trials a week earlier and now has been drafted into a senior state team within a week. 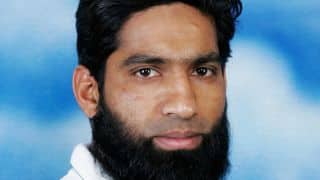 Mohammad Yousuf: Muttiah Muralitharan would not have been allowed to bowl under current ICC rules