I am confident that I will clear this bowling test, Mohammad Hafeez was quoted as saying by the Express Tribune.

Karachi: Pakistan off-spinner Mohammad Hafeez has expressed hope that the ban on his bowling will soon be lifted after undergoing a biomechanics bowling test at an International Cricket Council (ICC) accredited laboratory in Brisbane on Thursday. I am confident that I will clear this bowling test, the 36-year-old was quoted as saying by the Express Tribune. Talking about his test, Hafeez said that he was asked to bowl three overs to ascertain if he has found a fix for his illegal elbow flex a bend of more than 15 degrees level of tolerance permitted under the regulations. Mohammad Hafeez to undergo bowling test in Brisbane on November 17

Alham du Lillah done with the bowling action test. In shaa Allah all wil be fine.thanks for all the Fans 4 their wishes & prays ??stay blessed, he further wrote on Twitter. The Pakistan Cricket Board (PCB) wanted Hafeez to undergo testing at an ICC-accredited bio-mechanical laboratory because if his bowling action is cleared, he could possibly join the Pakistan squad for the upcoming tour to Australia. Pakistan is slated to play three-match Test series and five-match ODIs against the Steve Smith-led side, starting from December 15 in Brisbane. Hafeez, who appeared in 50 Tests, 177 ODIs and 77 T20s for Pakistan, has been facing problems with his bowling action since 2014.

He was handed a ban by the ICC twice for an illegal bowling action, firstly in December 2014 which later got cleared in April 2015 and second in July last year for 12 months. 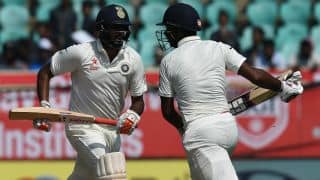