For the first time since February 1985, Pakistan have beaten Australia at the Melbourne Cricket Ground (MCG) in ODIs, with Hafeez scoring 72 in a paltry chase.

Mohammad Hafeez was not among the preferred ones for the initial squad. He was added as the 16th player in the Pakistani touring party for ODIs in Australia. But filling in for Azhar Ali as captain (why?), Hafeez inspired Pakistan to a historical win in the second ODI at Melbourne against Australia. For the first time since February 1985 have Pakistan beaten Australia at the Melbourne Cricket Ground (MCG) in ODIs, with Hafeez impressing both as captain and opener. Hafeez smashed 72 in Pakistan s successful chase of 221, which could have been tricky knowing the trait of fallibility that is associated with this side.

Pakistan produced an inspirational all-round performance, and did not repeat the mistakes that had cost them the first ODI at Brisbane. Pakistan made early breakthroughs just like in the first ODI, but here they kept chipping away with wickets, not allowing the Australians to settle. They restricted Australia to a modest 220 in 48.2 overs (unlike in the previous ODI, where they had allowed Matthew Wade to get away in the slog overs), but the job was far from done. In the previous match, Pakistan were shot out for a mere 176 in 42.4 overs. However, on Sunday, Hafeez anchored Pakistan s chase, starting off on an extremely cautious note, converting it into a match-winning innings. Pakistan sailed past their target by 6 wickets with a little over 2 overs to spare.

This victory Pakistan s first in Australia across formats since January 2005 also ended the ignominy of 16 defeats in a row. It also helped Pakistan to level terms with Australia in the ongoing five-match series, which is now 1-1. Australia had won the first game by 92 runs.

Chasing 221, Pakistan showed no qualms at all. In the first game, Azhar hobbling out disturbed their plans and their batsmen refused to change gears. The asking rate never went above 4.5 an over, something that allowed Pakistan batsmen to complete their job with a lot of ease.

Josh Hazlewood remained the best bowler, as always. Apart from a six by Shoaib Malik who scored 42 not out there was hardly anything that he gave away. However, he did not get that crucial breakthrough.

The outcome of the match could have been different had Steven Smith taken a regulation catch in the slips in the first over, when Mitchell Starc produced an edge off Hafeez’s bat.

The wicket at the MCG had absolutely nothing at all for the spinners. However, the Pakistan spinners, led by Imad Wasim, suffocated the Australians, who showed plenty of nervousness and technical inaptness and could simply not get going. This will make the Indians happy provided they have been keeping an eye on the contest in Melbourne that began hours before India’s first ODI against England.

The second ODI had several things in common with the first game for Australia, barring the fact that the hosts failed to find a batsman who would bat through and take them to safety. Steven Smith played the role of an anchor, but Australia s failure against a disciplined set of spinners on a non-turning wicket bit them hard.

Smith scored 60 off 101 balls with a mere 2 boundaries, and his innings was the only considerable performance by an Australian. Wade managed 35, Maxwell scored 23, and Travis Head struck 5 boundaries for his 29 off 31, but none of this was enough.

If there was one aspect which Australia can be proud of, it would be their running between the wickets. 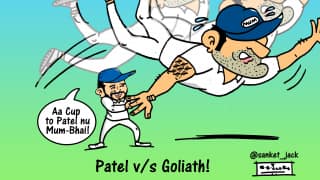