Currently, Misbah-ul-Haq and Asad Shafiq are on the crease.

Pakistan opener, Mohammad Hafeez played an exquisite knock of 224 as Paksitan earned a lead of 89 runs, against Bangladesh the first Test of the two-match Test series, at Sheikh Abu Naser Stadium in Khulna on Wednesday. Currently, Misbah-ul-Haq and Asad Shafiq are on the crease. LIVE Scorecard: Bangladesh vs Pakistan 2015, 1st Test at Khulna, Day 3

Earlier, Pakistan started the day on 227 for the loss of a wicket, as they ended on Day 2. It was a similar start as of where it had ended. However, by the end of the first session at lunch break, it was Azharl Ali who had departed for 83 and Pakistan finished on 333 for the loss of two with the lead by just a run.

As the post-lunch session kicked off, both Hafeez and Younis Khan continued to bat brilliantly and also put up a 62-run stand before Younis fell to Taijul Islam for 33, after being bowled by a good delivery that seem to be too good for the veteran and almost unplayable. Following his dismissal, skipper, Misbah made his way out to the crease as Pakistan brought up the 350. LIVE Updates: Bangladesh vs Pakistan, 1st Test, Day 3 at Khulna

It was then all about Hafeez as all the eyes were set on him and he eventually scored his maiden test double hundred. At the score of 205, he became the topmost batsman from Pakistan to score the highest individual score in an innings against Bangladesh in Tests cricket. He along with Misbah put up another impressive 63-run stand before he fell for 224 to Shuvagata at the score of 402. He made way for Asad Shafiq and both the batsmen put on four runs as the tea break kicked in. 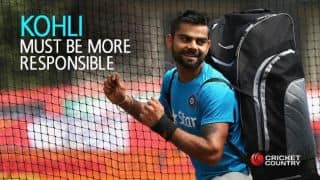