The PCB said in a statement today that Hafeez will fly to England on November 23.

The Pakistan Cricket Board has decided to send allrounder, Mohammad Hafeez to England for a formal biomechanic test on his bowling action next week.

The PCB said in a statement today that Hafeez will fly to England on November 23 for the test at Loughborough on the 24th.

The Board also announced that Hafeez will return to Dubai from England to join the team for the New Zealand series if he is declared fit.

Hafeez has been struggling with a mysterious hamstring injury ever since the match officials reported his bowling action during the first test against New Zealand in Abu Dhabi earlier this month.

A PCB official said that Hafeez was being sent for the test because under ICC laws a bowler reported by match officials had to undergo a biomechanic test at a ICC accreditated laboratory within 21 days of his being reported.

“Hafeez is confident that his bowling action is clean and they are no major problems that is why he has opted to undergo the test so early,” the official said.

If Hafeez fails the ICC test like his teammate, Saeed Ajmal who is presently suspended from bowling in international cricket than he will be suspended and has to undergo remedial work on his bowling.

The official said the PCB was working on a fast track plan to try to have Ajmal and Hafeez available for the World Cup by providing them all facilities to get correct their bowling actions.

Pakistan manager, Moin Khan has said that Hafeez’s case is not serious as only four of his deliveries have been reported by the match officials as illegitimate. 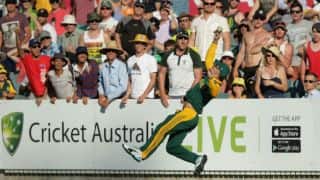