Pakistan finished on a challenging total of 308 for the loss of five wickets against hosts West Indies, in the first of the ODI series, at Guyana.

Pakistan‘s dependable batsman Mohammad Hafeez scored a splendid 88, as visitors finished on a challenging total of 308 for the loss of 5 wickets against hosts West Indies, in the first of the three-match One-Day International (ODI) series, at the Providence Stadium in Guyana on Friday. Apart from Hafeez, opener Ahmed Shehzad too contributed decently with a 66, to put the West Indies bowlers on the back foot, while Shoaib Malik too scored a prolific 53 to allow Pakistan to dominate the innings. As for West Indies, Ashley Nurse was the top wicket-taker, as he claimed 4 wickets for 62. FULL CRICKET SCORECARD: Pakistan vs West Indies 2017, 1st ODI at Guyana

Earlier, West Indies skipper Jason Holder won the coin toss, and elected to bowl first, as both the teams moved in with a batting-dominated side. Pakistan were off to a steady start, with the openers Shehzad and Kamran Akmal putting up the opening stand of 85 runs, before Akmal fell for 47, missing out on his half-century by just three runs. Skipper Jason Holder got rid of him in the 15th over. It was followed by another stable 64-run stand between Shehzad and Hafeez, before Shehzad fell for 67 to Nurse in the 28th over. However, his innings was good enough, as it did include six boundaries, along with a strike rate of 81.

At the score of 177, it was Babar Azam, who fell for mere 13 to Nurse in the 36th over. However, it was followed by a formidable 89-run stand between Hafeez and Malik, before Hafeez fell for 88 to Nurse in the 46th over. He scored his 10th ODI half-century, while his innings included six boundaries and three sixes, and came at a strike rate of 96. FULL CRICKET UPDATES: Pakistan vs West Indies 2017, 1st ODI at Guyana

At the score of 294, it was Malik, who fell right after scoring his half-century, as Nurse again got rid of him for 53, in the 48th over. However, it was the final pair of Sarfraz and Imad Wasim, who made sure that Pakistan go past the 300-run mark, and set up a challenging total for West Indies. 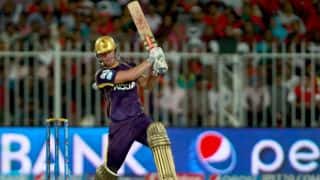 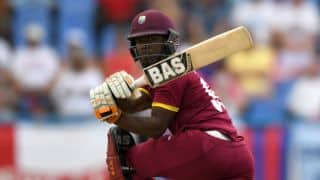