Mohammad Nabi also highlighted that due to lack of proper facilities, it's a bit difficult for the young cricketers to play in Afghanistan.

Hyderabad: Mohammad Nabi, who is playing for Sunrisers Hyderabad in the ongoing edition of the Indian Premier League (IPL), has insisted that Afghanistan is ready to play Test cricket. “We are ready to play Test cricket. We have quality bowlers as well as quality batsmen,” Nabi said in an exclusive conversation with ANI. The former Afghanistan skipper, along with leg-spinner Rashid Khan, became the first cricketers from their war-torn nation to be picked in the IPL auction held in Bengaluru last month.

Both were roped in by the defending champions during the auctions for Rs. 30 lakh and Rs. 4 crores respectively. Insisting that it would be a big challenge for both him and Rashid to perform in the IPL, the right-arm off-spinner said the league would also provide them to showcase their talent and tell the world that Afghanistan too have good cricketers.

“We are enjoying a lot,” Nabi said. The 32-year-old also highlighted that due to lack of proper facilities, it’s a bit difficult for the young cricketers to play in Afghanistan. “The young generation is Afghanistan wants cricket.It’s little bit difficult to play cricket in Afghanistan because of the lack of facilities. We do have good grounds in some cities,” he said.

For Nabi, IPL is the world s biggest T20 league and how to handle pressure and maintain composure under pressure situations would be of prime importance. Moreover, Afghanistan recently defeat Ireland by an innings in a four-day match at Greater Noida, which was the part of ICC Intercontinental Cup 2015-16-17. 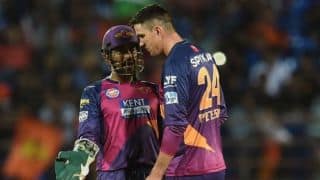