Mohammad Rizwan will look to convert this into a big one.

Mohammad Rizwan scores a half-century on One-Day International (ODI) debut against Bangladesh in just 46 deliveries at Dhaka. Rizwan came in at a time whn Pakistan were in a spot of bother. His partnership with Haris Sohail was just budding, but it was cut short after Sohail was dismissed in pursuit of getting some quick runs.

Fawad Alam and Rizwan are looking to steady the ship and at the same time get some runs that eases the pressure a little bit. the required run rate is above , but if these two bat well, Pakistan can still win the match. This partnershup will be key in determining how the game turns out eventually.

Earlier Bangladesh had won the toss and elected to bat first. Bangladesh posted 329 for 6 in 50 overs, thanks to centuries from Tamim Iqbal and Mushfiqur Rahim. Stand-in skipper Shakib-Al-Hasan too hit some lusty blows in the end to make sure Bangladesh got to a mammoth score. Azhar Ali makes his debut as Pakistan’s ODi captain in this match following the retirement of Misbah-ul-Haq. 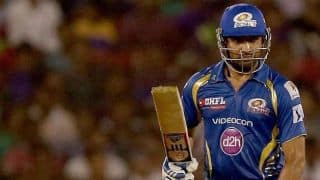