Karachi: The debate over whether tainted left-arm pacer Mohammad Aamer should be allowed to play for Pakistan again has created a big divide in Pakistan cricket with former cricketers Mohammad Yousuf and Rameez Raja engaging in a war of words on the issue during a TV show. The two waded into each other and used some very personal, coarse and unrefined language against each on national television during a show on Geo Super channel. The offensive exchange of words took place over the issue of Aamer with Yousuf claiming Rameez didn’t know cricket, was a “Sifarashi” player and good only to be a teacher. READ: Mohammad Aamer breaks down during Pakistan’s national conditioning camp; offers to leave

Yousuf went one step further when he made some personal remarks against the former Test captain turned commentator who lost his cool on air. It drew a sharp response from Rameez who termed Yousuf, who sports a beard, as a fake Mullah who tells lies and who caused havoc in Pakistan cricket.

The clips of the exchange soon became the talk of the social media with many former players, fans and critics expressing disappointment over the language used by both former stalwarts. Pakistan’s former test captain Rashid Latif said what happened should never have happened and was most unfortunate. READ: Imran Khan backs Mohammad Aamer in his bid to return to Pakistan team

“I have played with both these players. They are looked upon with respect by the fans. It does not pass on the right message to anyone,” Latif said. Rameez has been clear about his views on allowing Aamer back into the national team. “My views are clear to everyone but this is a decision that the Pakistan cricket board has to take and only time will tell whether they took the right decision or not,” Rameez said.

“I thought the PCB could have handled the Aamer matter in a better manner,” he said. Two of Pakistan’s senior players Muhammad Hafeez and national one-day captain Azhar Ali both refused to train with Aamer in the national training camp in Lahore but later agreed to return on the intervention of the PCB chief Shaharyar Khan. READ: Shahryar Khan counsels Mohammad Hafeez, Azhar Ali over reservations against Mohammad Aamer

“I thought they took a brave stand,” he added. 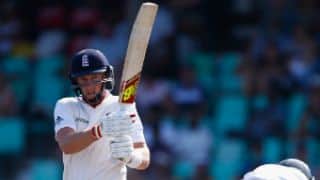 Mohit Sharma needs another month to get back to bowling