Mohammed Shami: My injury has healed; I have resumed training

Mohammed Shami: My injury has healed; I have resumed training

Mohammed Shami claims that his toe injury has healed and he has resumed training.

Pleased at being named in the International Cricket Council’s (ICC) 2014 One-Day International (ODI) team, India seamer Mohammed Shami on Thursday said he is focussed on improving his ‘death-bowling’ keeping in mind the forthcoming Australia tour and the ICC 2015 World Cup. “My focus is to improve my bowling at the end of an innings. It is imperative that as a pacer I bowl well at the death. I am trying to incorporate more variations in my arsenal so that I can implement them in match situations,” Shami said on the sidelines of a programme organised by his Indian Premier league (IPL) team Delhi Daredevils.

“I am training to make my yorkers and slower deliveries more potent so that it helps me to pick up wickets. Yorkers are very important for a pacer, normally I back myself to bowl towards the end of an innings.” He said his training will be aimed at maximising the accuracy of his block-hole deliveries so that batsmen can’t score off him easily.

“Bowling at the death is always challenging and yorkers and slower balls have to be used judiciously. You need to be very accurate with them otherwise you will be taken for runs,” the seamer said. He expressed satisfaction at getting an entry into the ICC ODI team of 2014 and said it was a result of his hard work, which has given him added motivation to improve his performance from here on.

Shami was the highest wicket taker this year, claiming 38 wickets from 16 matches. He was joined by India captain Mahendra Singh Dhoni and Virat Kohli in the ICC team while Rohit Sharma was named the 12th man.  The Bengal bowler was advised 10 days rest following a toe injury sustained in the first ODI against the West Indies at Kochi that ruled him out of the ongoing Sri-Lanka ODI series but Shami claims to have attained full fitness since.

“I have completely healed from the injury and ready to play matches. I am back at training and also working out at a gym. I have been given a specific set of exercises which I am following and I am eager to get back on the field,” the 24-year-old said.

Shami also spoke of his eagerness to bowl well in challenging Australian conditions but isn’t deterred at the enormity of the task. “I will continue to bowl and prepare the way I have done so far. It is giving me results so won’t tinker with it. But I have to keep in mind the enhanced pace and bounce of the Australian pitches. I am used to bowling in overseas conditions so that won’t be much of a factor for me. But I will surely keep the nature of Australian pitches in mind while preparing myself. It takes a little bit of time to adjust to the conditions in Australia. But things won’t vary massively,” he said.

India are scheduled to begin their Australia tour on December 4 and will play four Tests and an ODI tri-series also involving England before the ICC World Cup, beginning February 14. 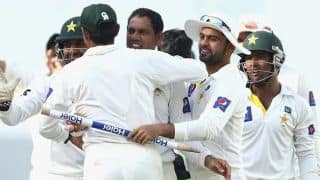