Mohammed Shami scalped his 100th wicket during Day Two of the second Test between India and South Africa at SuperSport Park, Centurion. He became the 21st Indian and overall 183rd player to the landmark. He is now levelled with all-rounder Irfan Pathan, with exact 100 victims.

Resuming from 269 for 6, South Africa looked upon skipper Faf du Plessis and Keshav Maharaj to bail them out. A total of 350 would be ideal. For that to happen, the duo needed to stick around. Nonetheless, Shami broke the shackles with a length delivery and found Maharaj’s edge for 18.

Few breakthroughs from the 27-year-old would rattle hosts for under 300.

Shami commenced the series with 95 scalps. He picked a wicket in the first innings and three in the second outing at Cape Town, extending his tally to 99. 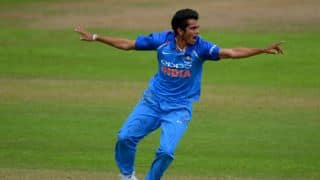