Mohammed Siraj made his debut in the second ODI against Australia on Tuesday at the Adelaide Oval.

Mohammed Siraj made his debut in the second ODI against Australia on Tuesday at the Adelaide Oval.

Right-arm pacer Siraj, who took the place of Khaleel Ahmed in India‘s Playing XI, had a forgettable outing as he ended up leaking 76 runs in 10 wicketless overs the second most expensive figures by an Indian bowler on ODI debut.

Siraj, 24, has played three T20Is for India from which he has managed a solitary wicket while conceding runs at 12.33 an over. In List A cricket, his career record stands at 56 wickets from 31 matches an an average of 22.92 and economy rate of 5.47.

The record, though, is held by Karsan Ghavri hold ended up leaking 83 runs in 11 overs on ODI debut against England in 1975 at Lord’s.

He though came close to picking up a maiden ODI wicket the first when Glenn Maxwell successfully used the DRS to reverse an on-field lbw decision and then when he has dropped by Rohit Sharma in the 47th over.

Top-five expensive spells by an Indian on ODI debut

Shaun Marsh produced an excellent hundred to carry Australia towards 300, but a collapse of four wickets for three runs, triggered by Bhuvneshwar Kumar in a terrific display of late-overs bowling, set India a target of 299.

Bhuvneshwar and Mohammed Shami removed Australia s openers inside eight overs, after which Marsh forged half-century stands with Usman Khawaja, Peter Handscomb, Marcus Stoinis and Glenn Maxwell for the second, third, fourth and fifth wickets while shoring up one end of the innings quite brilliantly on a very hot day in Adelaide. 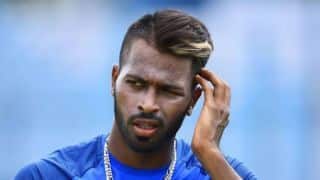