Pacer Mohammed Siraj (4/18) produced another fiery spell, pushing India A towards a big win against South Africa A on day three of the first unofficial Test.

Pacer Mohammed Siraj (4/18) produced another fiery spell, pushing India A towards a big win against South Africa A on day three of the first unofficial Test.

When stumps were taken due to bad light, the visitors were trailing by 239 runs after India A declared their first innings at 584 for eight, following half centuries from Hanuma Vihari and Srikar Bharat.

Zubayr Hamza and Rudi Second were batting on 46 and 4, respectively, as South Africa A ended the day at 99 for four in their second innings.

Earlier in the day, Vihari made 54 off 108 balls with three boundaries and Bharat scored 64 off 77 balls with five fours and four sixes.

Vihari was unfortunately run out of Beuran Hendricks and Bharat was caught by Senuran Muthusamy off Duanne Piedt.

Axar Patel remained 33 not out with a boundary and a six.

Captain Shreyas Iyer made 24 before he was caught by wicketkeeper Rudi Second off Hendricks.

In the first session, Agarwal disappointed the fans as he fell without adding a single run to his overnight 220. He was adjudged leg before off the very first ball he faced from Hendricks.

Trailing by 338 runs, South Africa-A lost three wickets under nine overs in their second innings against Siraj, who had taken a five-wicket haul in the second innings.

Openers Sarel Erwee and Pieter Malan were snapped up by Siraj for three and zero.

The pacer once again struck by sending off captain Khaya Zondo, who failed to open his account.

However, Zubayr Hamza and Senuran Muthusamy did well in the last session to take the total to 92 for four. The duo added 86 crucial runs for the fourth wicket.

Thereafter, Muthusamy was snapped up by Vihari off Siraj, giving him his fourth wicket of the innings.

“Siraj has been good with the ball. In fact, we believe in bowling as a unit. Navdeep Saini and Rajneesh Gurbani, also bowled really well,” double centurion Mayank Agarwal told reporters after the end of day’s play. 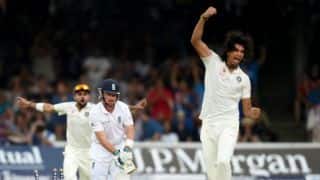