Mohit will be looking to fully use the 'neutral' Eden Gardens wicket, which has hosted four matches this season with none of them lasting the distance.

Kolkata: Haryana skipper Mohit Sharma will be hungry to take his side to a victory and seal a Ranji Trophy 2016-17 quarterfinal berth when they face a struggling Tripura in the group C fixture beginning here tomorrow at Eden Gardens, Kolkata. The 28-year-old seamer, who has featured in 26 One-Day Internationals (ODI) and eight Twenty20 Internationals (T20I), will be looking to fully use the ‘neutral’ Eden Gardens wicket, which has hosted four matches this season with none of them lasting the distance. The success mantra has been simple — win the toss, elect to field and bowl the opposition out cheaply and win inside four days.

All the four teams — Himachal Pradesh, Karnataka, Assam and Maharashtra — followed the same road to victory as toss will once again play a crucial role. However, Tripura skipper Manisankar Murasingh did not agree: “The pitch looks fresh this time and I think the match will last all four days this time.” Already out of contention, Tripura will hope to dash the hopes of Haryana, who have same points as second-placed Andhra Pradesh (25) and will be eyeing three points from their last league match to become the second team after leaders Hyderabad to make the last eight stage.

So far, Mohit has scalped 24 wickets in the ongoing season of Ranji Trophy from eight matches at an impressive average of 18.16. Overall, he has taken 119 wickets in First-Class with the best bowling figure of five for 26. Mohit last played for Indian side against South Africa last year at Mumbai and since then, he has been toiling hard in domestic cricket to get back in the side. 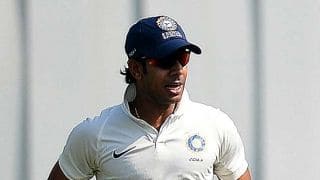 Zoe Goss: A career beyond that Brian Lara dismissal