England have gotten off to a slow start, only scoring 15 runs from four overs.

After India scored a mammoth target of 304 for seven after being sent into bat by Alastair Cook, England saw the target being revised to 295 in 47 overs and England had to go for their shots right away. Bhuvneshwar bowled the first over and drifted one on his pads and Cook was on the march. Mohit Sharma bowled a gem of an over to Alastair Cook during the second over. The medium-pacer probed, teased and had cook uneasy. Bhuvneshwar’s third over saw the Alex Hales get his first boundary of his One-Day International (ODI) career. Mohit Sharma’s nagging line is frustrating England in the early overs. 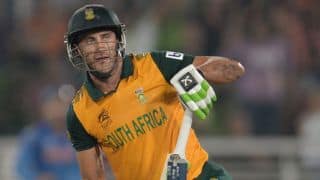 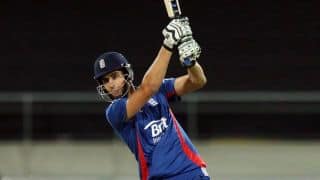