It was in the 41st over, when Kayes scored his second Test half-century.

Bangladesh batsmen, Mominul Haque and Mahmudullah put up the second 50-run stand of Day 1 for the third wicket, as they finished on 150 for the loss of two wickets in 60 overs, in the first of the two-match Test series against Pakistan, at the Sheikh Abu Naser Stadium in Khulna on Tuesday. LIVE Scorecard: Bangladesh vs Pakistan 2015, 1st Test at Khulna, Day 1

Earlier, Bangladesh skipper, Mushfiqur Rahim won the toss and elected to bat first on a flat batting track at Khulna. Bangladesh had two debutantes in the form of Soumya Sarkar, Mohammad Shahid and Sami Aslam. Pakistan, on the other hand, dropped their start leg-spinner, Saeed Ajmal. Bangladesh lost the only wicket of opener, Tamim Iqbal as they finished on 60 for the loss of a wicket at lunch.

The post-lunch session began on a good note for the Bangladesh batsmen, as they went in with an attacking approach and were looking to steer the innings fast. Although, the Pakistan bowlers were bowling quite well in good areas, line and length, both Imrul Kayes and Mominul were getting those important runs.

It was in the 41st over, when Kayes scored his second Test half-century, with six boundaries along with a strike-rate of 39.23 in 129 deliveries. However, the next ball off Mohammad Haffez was caught by the bowler himself, and barely after scoring his knock, he was on his way back to the pavilion as his joy was extremely short lived. Live Updates: Bangladesh vs Pakistan 2015, 1st Test at Khulna, Day 1

Out came Mahmudullah and together with Mominul, put up the 50-run stand for the third wicket, the second of the day as they batted throughout for rest of the session, before the tea break kicked in. 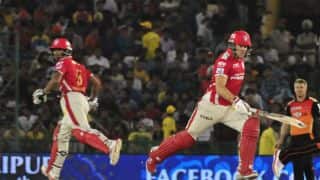