Young left-hander Mominul Haque hammered a maiden Test century as Bangladesh replied strongly to New Zealand's 469 on the third day of the first Test in Chittagong on Friday. 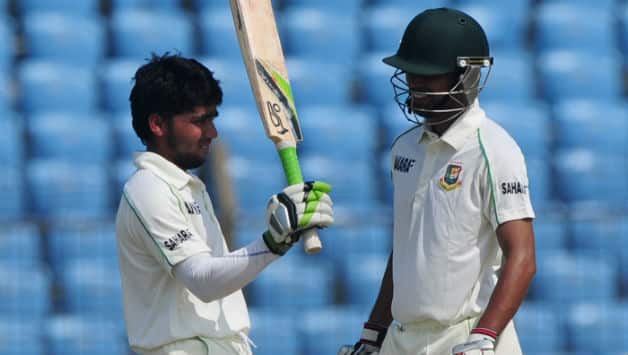 Young left-hander Mominul Haque hammered a maiden Test century as Bangladesh replied strongly to New Zealand‘s 469 on the third day of the first Test in Chittagong on Friday.

The 22-year-old was unbeaten on 130 as the hosts went to lunch on 176 for three, still trailing the Black Caps by 293 runs at the Zahur Ahmed Chowdhury stadium.

Shakib Al Hasan was the other batsman at the crease on 15, having added 42 so far for the fourth wicket with his free-stroking partner.

Mominul, nicknamed Sourav by team-mates for a batting style that reminds them of former India captain Sourav Ganguly, has so far hit 21 boundaries.

The youngster, who came in to bat in his fourth Test with his side struggling at eight for two on Thursday evening, launched a spectacular counter-attack to keep the Black Caps at bay.

The pair, resuming at 103 for two, took the score to 134 when Ayub was caught behind to hand debutant left-arm seamer Corey Anderson his first Test wicket.

Bangladesh, who have lost eight and drawn one of their nine Tests against New Zealand, need a big first innings score to avoid defeat in the first game of the two-match series.

Sachin Tendulkar's retirement is a loss of phenomenal team player