Monimul Haque consolidated from his ton to power Bangladesh to 272 for the loss of four wickets at tea on third day of the firs Test at Chittagong. 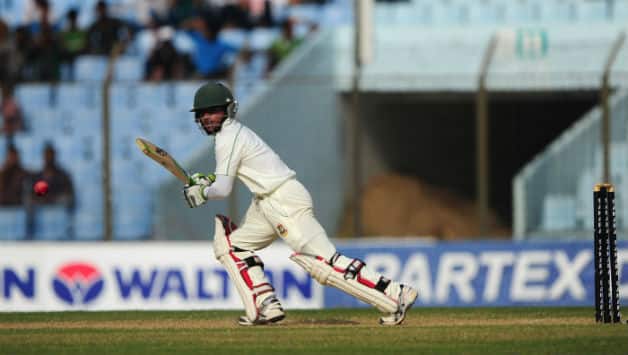 Monimul Haque was unbeaten on 172 at tea © AFP

Monimul Haque consolidated from his ton to power Bangladesh to 272 for the loss of four wickets at tea on third day of the firs Test at Chittagong.

While Haque looked good to get a double ton, Musfiqur Rahim who walked in after the fall of Shakib Al Hasan’s wicket was nearing a quickfire half century.

The only wicket to fall in the session was that of Shakib Al Hasan who went for a cut shot and the ball with some bounce in it took the edge of his bat and landed into the gloves of wicketkeeper J Watling.

Mominul, nicknamed Sourav by team-mates for a batting style that reminds them of former India captain Sourav Ganguly, has so far hit 21 boundaries.

The youngster, who came in to bat in his fourth Test with his side struggling at eight for two on Thursday evening, launched a spectacular counter-attack to keep the Black Caps at bay.

The pair, resuming at 103 for two, took the score to 134 when Ayub was caught behind to hand debutant left-arm seamer Corey Anderson his first Test wicket.

Bangladesh, who have lost eight and drawn one of their nine Tests against New Zealand, need a big first innings score to avoid defeat in the first game of the two-match series.