However, when a side which has looked they have been the best in the World Cup thus far, restricts the opponents to a paltry score and then goes out in the quarter-final of the tournament itself, not too many other words would do as much justice. 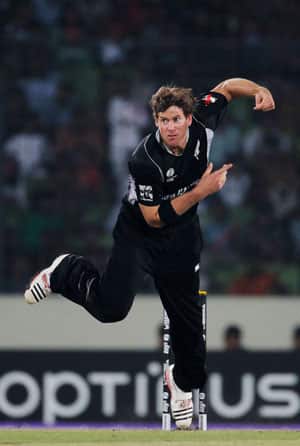 My resolution before the start of the tournament was to refrain from using clich s in my articles. Words like chokers and South Africa in the same sentence bordered upon a clich and hence, I had decided not to. However, when a side which has looked they have been the best in the World Cup thus far, restricts the opponents to a paltry score and then goes out in the quarter-final of the tournament itself, not too many other words would do as much justice.

Hashim Amla has been a little fidgety at the crease in the tournament and despite being unfortunate to get out the way he did, he looked a little too aggressive so early in the inning. In the first over of the innings from Nathan McCullum, he inside edged the ball on to the wicket-keeper s foot which then went on full to the first slip. Ross Taylor held on to the sitter.

However, the second wicket stand between Graeme Smith and Jacques Kallis seemed to have done enough to get the South Africans closer. Smith was quick off the blocks while Kallis took his time as he usually does to get the side to 69 for one in the 15th over.

Even when Jacob Oram had Smith (28) slicing the ball to the point fielder, the presence of AB de Villiers stalled any hopes of a South African collapse. It was probably a matter of time before South Africa could get into the territory of feeling absolutely safe.

Despite slowing down, the South Africans were 108 for two in the 24 overs and the win looked like a formality. Much like it had in the game against the English while chasing 172.

JP Duminy pottered around for a couple of over for his three, before failing to move his feet and getting bowled by McCullum. 121 for four.

AB de Villiers was then called for a non-existent single by Faf du Plessis. de Villiers responded but failed to make it to the crease. South Africa s best player of the World Cup was gone for 35.

Johan Botha was bowled by Oram for two, Robin Peterson failed to reproduce the batting form he had showed against India and Dale Steyn seemed rather arrogant in trying to hit McCullum out of the park but was only caught. South Africa 146 for 8 and staring down the barrel.

du Plessis looked cool apart from the squabble that he got with the Kiwi fielders after the run-out but with the asking rate mounting to over six per over, there was only so much he could do. He scored 36 and was involved in 26-run stand for the ninth wicket but that was all that the side could get.

Once Oram had sent du Plessis off, the side was bowled out by Luke Woodcock.

When New Zealand were restricted to 221 in their 50 overs, it looked like it was going to be a cakewalk for South Africa. The South African captaincy and bowling had been one to remember when the New Zealand side batted, making it hard for them.

Martin Guptill and Brendon McCullum capitulated in a hurry before a third-wicket stand between Jesse Ryder and Ross Taylor brought some respectability. Ryder was a pale shadow of what he usually is, rather circumspect in his approach, something that was probably brought about by his poor form in the tournament.

Taylor looked good for the time he was the crease but New Zealand failed to get the acceleration that was expected out of the pair. First, Taylor and then Ryder tried to get the leg-spinner Imran Tahir out of the park but only succeeded in giving easy catches to the deep fielders.

Scott Styris was a quick 16 off 16 before he gave it away to Morne Morkel while the rest of the side failed to extract too many off the last ten overs. It was only Kane Williamson who managed to play through to the 50 overs and ended unbeaten on 38. At that stage, it hardly looked like he had done his job given that he took 41 balls to get there, but not too many would have thought that South Africa had enough in their tank to capitulate again!