Monty Panesar and Graeme Swann restrict India to 327 at Lunch

Monty Panesar and Graeme Swann restrict India to 327 at Lunch

Monty Panesar took five, while Graeme Swann got four as England bowled out India for 327 at Lunch on day two of the second Test at Mumbai's Wankhede Stadium. 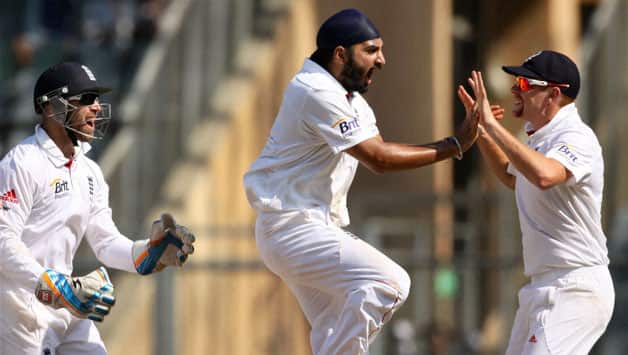 Monty Panesar took his 11th five-wicket hall in a Test innings, while Graeme Swann got four wickets as England bowled out India for 327 at Lunch on day two of the second Test at Mumbai’s Wankhede Stadium.

The English spinners ran through the Indian lower order, as Cheteshwar Pujara waged a short-lived, yet lone battle for India, scoring 135. India will be happy with their 300-plus total on a dust bowl of a track that has a lot of turn and bounce, perfect for the three-pronged spin attack of Ravichandran Ashwin, Pragyan Ojha and Harbhajan Singh.

Pujara started the day with No 8 Ashwin (68), who had scored a defiant fifty on day one. But the Indian off-spinner was soon to fall to Panesar (five for 129) leg-before. Harbhajan Singh then walked in and smacked a couple of boundaries and a six before becoming Swann’s 200th wicket in Test cricket.

But the big wicket for England came when Swann got Pujara; it was the first time in the series that he had been dismissed . The Saurashtra batsman was been beaten in the flight after leaving the crease after Swann tossed it up wide. The ball refused to turn and beat the outside edge; Prior did the rest to get a much coveted wicket for the Englishmen.

Zaheer Khan then walked in and heaved Panesar for a four and a six in consecutive deliveries, before Swann cleaned him up in the next over. Replays showed that it wasn’t bat-pad as umpire Aleem Dar had thought it would be.

India were bowled out with 20 minutes to go before lunch, which meant their bowlers had 10 minutes to have a go at the England openers before the break.

But Alastair Cook and Nick Compton survived four overs of Ashwin and Ojha to take lunch at seven for nought.