Monty Panesar to train Australia ahead of India tour

Monty Panesar to train Australia ahead of India tour

Monty Panesar be guiding the Australian batsmen on how to tackle the deadly spin in the sub-continental conditions before the tour of India in February 2017.

Former England spinner Monty Panesar has been asked to work with Australia before the tour of India in February 2017, where the team is scheduled to play a 4-Test series for the Border-Gavaskar Trophy. Panesar would be working with the team, as he aims to guide the bowlers to be effective in the spin conditions of the sub-continent. He is currently playing grade cricket for Campbelltown, a team from Sydney. Panesar has toured India thrice, while he claimed 17 wickets in 2012, when England beat India to clinch the Test series 2-1. He would also be guiding the batsmen on how to tackle the deadly spin in the sub-continental conditions.

“Pat Howard [Cricket Australia’s team performance manager] gave me a call and asked if I was available to work with a few players for the upcoming series and I was happy to do that. The hardest role for a spinner is [to] bowl 30 overs in a day, go for three an over, and give [the captain] control from one end and build pressure, and that’s going to probably be one of the things [they] are going to ask me,” Panesar was quoted saying on BBC Radio 5 live, in the Tuffers and Vaughan Cricket Show.

Panesar also said that it is something he always had a passion for. “While I’ve been out here I’ve been helping the [Campbelltown] under-16s, under-21s and also the grade team, so this is a good opportunity to work with international cricketers. Coaching is more about getting to know the person as much as talking about the technical side of the game. Once you develop that trust in people’s opinions, your coaching becomes that much easier,” he added.

“From a playing side, I’m trying to get my shoulder a lot stronger, trying to get fitter again. Hopefully when I get back [to England] there will be opportunities to get involved at a county and get back into first-class cricket. I still have international ambitions,” he concluded. 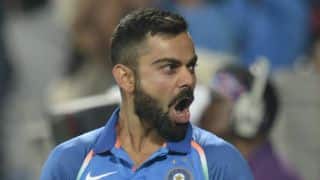 For Virat Kohli, having a few friends is the mantra for success