Batting legend Sunil Gavaskar has said that Ravichandran Ashwin should be a certainty in India's Test XI.

Batting legend Sunil Gavaskar has said that Ravichandran Ashwin should be a certainty in India’s Test XI and the reason why he has been struggling of late is because the team management is not showing confidence in him.

Despite being included in India’s touring party for the West Indies Tests, Ashwin failed to get a game with Ravindra Jadeja being selected as the lead specialist spinner. The ongoing first Test against South Africa in Vizag is Ashwin’s first of the year.

“Ashwin should be a certainty. The fact that he has not been made to feel the comfort level is the reason why we are seeing him struggle a little bit,” Gavaskar told Star Sports. “He has also got to feel he has got the confidence of the people around him. When you don’t have the confidence of people around you, when you keep getting sidelined then you try a little too hard.”

Gavaskar hinted that on-field performances isn’t the only reason why Ashwin keeps getting overlooked. “I think there is more to it than just cricketing performances which is the reason he just finds himself sidelined more often than somebody with his record should be. Somebody who has got almost 350 wickets can’t be sidelined as regularly as he has been,” he said.

Ashwin on Friday, took his 27th five-wicket haul in Test cricket and is now just three wickets way from completing 350 wickets in the format. If he manages to do so, he will draw level with Sri Lankan legend Muttiah Muralitharan for the fastest to the landmark (both in 66 Tests).

Gavskar also felt that comparing Ashwin with opposition spinners when India play overseas is a little unfair. “I think, there is always these little comparisons he suffers from. When playing in Australia, he is compared to Nathan Lyon. He is doing that, doing this. But Lyon is bowling to the Indian batsmen. Similarly, in England, when Moeen Ali got 6 or 7 wickets, you say he didn’t get any wickets. It can happen,” he said. 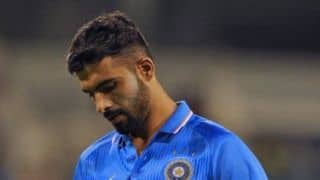