Following the two-Test series against Bangladesh, South Africa are scheduled to play three ODIs and two T20Is lined up against the same opposition.

Johannesburg: South African pacer Morne Morkel is all set to be sidelined for 4-6 weeks after scans confirmed a side strain. The 32-year-old sustained the injury during his side’s huge 333-run win over Bangladesh in the opening Test of the two-match series. He will be replaced by Dane Paterson for the second and final Test, starting from October 6 at Bloemfontein.

Proteas team manager, Dr Mohammed Moosajee stated, “Morne complained of a sharp pain to his left side yesterday and immediately aborted his bowling spell. Subsequent scans this morning confirmed a Grade two tear to the left abdominal oblique muscle which rules him out of the remainder of the series. He will need a 4-6 week recovery period and will target a return for the T20 Global League in November.

Morkel’s injury has come as a major blow for South Africa, who are already without their star fast bowlers Dale Steyn, who continues to recover from a shoulder injury, and Vernon Philander and Chris Morris. The limited-overs leg against Bangladesh will be followed by T20 Global League, a one-off 4-day game against Zimbabwe on Boxing Day eve and India series starting early 2018. 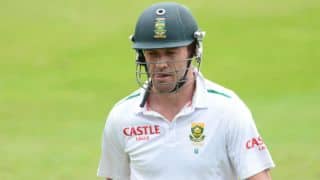