Morne Morkel is set to retire from international cricket after the four-Test series between South Africa and Australia. Morkel, 33, a veteran of 83 Tests, 117 ODIs and 44 T20Is, announced the same at a press conference. He cited family commitments as his reason. The series will start with the first Test at Durban from March 1. The next 3 Tests will be played in Port Elizabeth, Cape Town and Johannesburg.

This means Morkel has already made his final appearance in ODIs. He has been one of South Africa’s finest ODI bowlers. He had a disappointing outing in the ODI series against India (2 wickets at 103), but was impressive against India in the Test series, bagging 13 wickets at 20. South Africa won the series 2-1.

Standing almost two meters tall, Morkel’s strength lied in his ability to generate bounce and pace. In ODIs, he has better numbers than his long time bowling partner Steyn. He has 188 wickets from 117 ODIs at 25.32.

Morkel made his Test debut in 2006-07, against India at Durban. He has 294 wickets from 83 Tests at 28.08. He is set to be the fifth South African bowler to enter the 300-wicket club, after Shaun Pollock, Dale Steyn, Makhaya Morkel and Allan Donald.

However, Morkel will continue to play the lucrative T20 leagues around the world. His Australian wife Roz Kelly was a part of Big Bash League’s coverage last summer. The couple have a son.

“Cricket is what I love. Playing for the Proteas is something very special (but) family comes first,” Morkel was quoted by cricket.com.au at the press conference.

He mentioned that his favourite memory was making his Test debut. He made important contributions with bat and got 3 for 86 in that Test. Still on the same topic, he added: “becoming the No. 1 Test team, beating Australia in Australia, England in England, so many right now running through my mind.”

Usman Khawaja was all in praise of Morkel: “He’s a world-class bowler, he has been for a long time. Even more so he’s a great bloke. Every time I see him off the field he’s always smiling, always saying hello. It’s really nice to see that when you meet someone for the first time. I wish him all the best. We just bumped into each other just then and I told him Queensland is a beautiful state if he ever wants to move over.”

There were reports last year that Morkel was contemplating playing county cricket in England under the Kolpak regulation, which would make him ineligible for national selection. 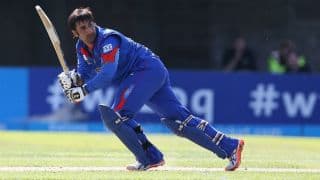