South Africa managed to reach a huge total of 195 for three in the stipulated 20 overs in the 3rd T20I played against West Indies at Durban on Wednesday. The 111-run opening partnership between Reeza Hendricks and Morne van Wyk laid the foundation for the big total posted by South Africa.

Morne van Wyk who also achieved his maiden T20I hundred off just 67 deliveries. He gave the finishing touch to the South African innings as he smacked two huge sixes in the final over bowled by Dwayne Bravo. He remained unbeaten on 114 off just 70 balls which included nine boundaries and seven gigantic sixes.

Earlier, West Indies started well in the initial overs as Sheldon Cottrell bowled two economical overs but things started getting sour for West Indies as South Africa gathered 32 runs from the fourth and fifth over. Both the openers displayed array of pick-up shots and some flamboyant strokes in powerplay window. At the end of powerplay South Africa managed to reach 62 for loss of no wicket.

The two overs bowled after the powerplay were expensive too as they accounted for 24 runs. The flow of runs receded after that before Reeza Hendricks who tried to hoick a length ball from Kieron Pollard was caught by Dwayne Smith in the deep mid-wicket region.

In the beginning, West Indies won the toss and elected to bowl first. South Africa brought back in JP Duminy for the 3rd T20I who was out of cricket for sometime due to knee injury. 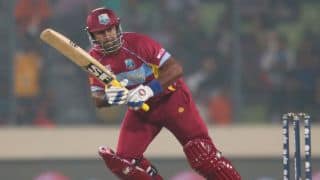