Southee went past Sachin Tendulkar's mark of 70 with consecutive sixes in Colombo.

On the day that he became the fourth New Zealand bowler to reach the milestone of 250 Test wickets, Tim Southee also achieved another and less significant landmark, but one that will still surprise many.

On Monday, day four of the second Test between Sri Lanka at New Zealand at Colombo’s P Sara Oval, Southee clubbed two consecutive sixes off Lasith Embuldeniya to prompt the declaration at 431/8.

The first of those sixes was Southee’s 70th in Test cricket, which put him past Sachin Tendulkar‘s mark. Off the next ball from Embuldeniya, Southee hit one more to move to 72 sixes in Tests.

Tendulkar, the leading run-getter in Test cricket, hit 70 sixes in a career that spanned 200 matches. Southee has gone past him in his 67th Test.

Southee finished 24 not out off 10 balls, in partnership with centurion BJ Watling as New Zealand declared with a lead of 187 over Sri Lanka. 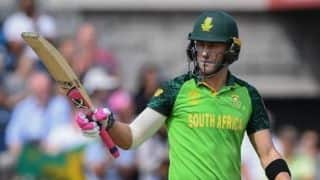