In a humane gesture, India cricket captain MS Dhoni has adopted a rescued stray pup from the Hope and Animal Trust in Ranchi. MS Dhoni posted the picture of the pup (above) on his Twitter page. Photo courtesy – MS Dhoni s Twitter profile.

In a humane gesture, India cricket captain MS Dhoni has adopted a rescued stray pup from the Hope and Animal Trust in Ranchi.

Dhoni, who has posted a picture of the pup on his twitter page, has named the dog ‘Leah’.

“Adopted a rescued pup from Hope and Animal Trust Ranchi .v call her Leah in English and Liya in Hindi (sic),” he wrote in his twitter handle.

Dhoni, known for his love for animals, had adopted a nine-year-old tiger named ‘Agasthya’ from the Chamarajendra Zoological park better known as Mysore zoo in 2011.

Dhoni is presently enjoying a much-deserved break from international cricket. He is not a part of the Indian team currently touring Zimbabwe as the selectors decided to give him a rest and handed over the captaincy to Virat Kohli for the ODI series.

Dhoni is enjoying his break to the fullest as he also twitted on a range of issues, including his motorbike and day-to-day activities.

“I think my plan of action is to restore the 1st bike tht I bought for rs4500, will upload its pic maybe tomorrow.its in a very bad shape (sic),” he wrote.

“Tell me one business where home delivery of the product is cheaper compared to the price of the product when u go and pick it up (sic),” he asked his followers on Twitter.

“In Ranchi if the milkman delivers milk to ur house he charges 32 rs but if u go and pick it from his place he asks for 34 rs. (sic)” 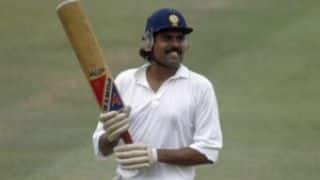