West Indies bowlers will have to bat well to level the five-match ODI series against India.

Overnight rain delayed toss for a brief period in the third ODI of the five-match series between India and West Indies. Nonetheless, play commenced after slight gap and West Indies put India to bat. Visitors lost early wickets in form of Shikhar Dhawan and Virat Kohli, but Ajinkya Rahane and MS Dhoni held Indian innings even though it struggled to garner pace till the 40th over. West Indies were better with the ball, but will have to bat well to get past the total and level the series on a difficult surface.

India lost in-form opener, Dhawan, early. He lashed onto a short ball and went for an upper cut, but was beaten by the pace off the ball. Kohli resurrected the innings for a while with Rahane, but was troubled outside off stump with extra bounce and slowness of the track. Jason Holder continued to ball in that area and was finally rewarded in the 10th over. The Indian captain tried to guide the ball towards third man, but debutant Kyle Hope, at gully, plucked a stunner to dismiss the right-hander. Kohli became Holder’s 50th scalp.

Nonetheless, Holder opted for a defensive field with Yuvraj Singh coming in the middle. He was tested against the short balls before striking some fluent strokes during his stay. Rahane and Yuvraj were involved in a 50-run stand for the third wicket but a successful review led to the latter’s dismissal. Yuvraj was not at ease against the tweakers, in particular Devendra Bishoo, and was trapped lbw for 39. However, Rahane continued his merry run in the series. He took the innings forward by slamming his second fifty of the series. He paced his knock and took on the short balls after settling in.

Rahane got support from Dhoni, but the duo struggled to get going. Dhoni was made to reach to the pitch off the ball and work hard against the slower bowlers. He was on the mat against Bishoo. However, the senior pro did not throw his wicket. Just when the pair eyed quick runs in the death overs, Rahane fell for 72. His inability to clear the ropes in the final overs remains an area of concern. Dhoni carried on and registered a vital fifty (63rd overall); thereby surpassing Mohammad Azharuddin to become India’s 4th highest run-scorer in the format.

The last 10 overs leaked 100 runs as Dhoni and Kedar Jadhav got some rhythm and hosts’ death bowling woes continued. As a result, India marched towards a decent score of 251 for 4 in 50 overs.

Will this total be enough or West Indies will show their mettle with the bat? 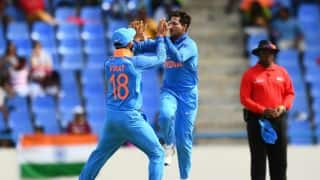