India medium pacer R Vinay Kumar is not on anyone's mind and he would just like it the way it is as long as his skipper Mahendra Singh Dhoni keeps turning to him and batsmen keep nibbling at his swinging deliveries. 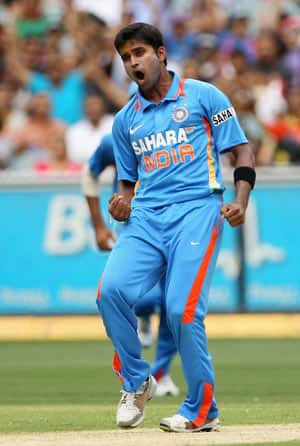 India medium pacer R Vinay Kumar is not on anyone’s mind and he would just like it the way it is as long as his skipper Mahendra Singh Dhoni keeps turning to him and batsmen keep nibbling at his swinging deliveries.

The Karnataka medium-pacer has beggared belief with nine wickets at a staggering average 20.11 — a wicket every 25th ball — in the ongoing Commonwealth Bank one-day series. With the likes of Lasith Malinga and Ryan Harris in the fray, his is the case of the meek who has inherited the earth.

Oh, he must have bagged tail-enders. Or, his economy rate must be atrocious. Surely, the scalps are to catches in the deep when the batsmen are going for maximum. All wrong, for he has mostly got Pontings and Jayawardenes and Warners; his economy rate is 4.89 and the catches are unerringly the pouches in the slip cordon.

This is his best moment yet but selectors have very little to do with it. He was not an original selection to Australia till last-minute injury to Varun Aaron put him on plane to Down Under.

He was also way down the pecking order when WACA Test beckoned last month. Yet, Dhoni decided to go with four quicks and Vinay earned his Test cap.

The euphoria lasted only four hours. Brought in to bowl the sixth over of the innings, the 28-year-old saw a Warner hit sail over his head into the stands in his very first over.

The pocket-dynamo opener was to smash one more six and take 43 runs off his 36 balls on way to a blistering 180 runs. His dream had turned into a nightmare all too swiftly.

Fortunately, Dhoni believed in him. The Indian captain surely can’t have enough of Vinay in shorter formats of the game. He was put through his pace in two Twenty20 encounters and then preferred, at times, to proven quality of Praveen Kumar in the one-day triangular series.

Each of such acts of faith by Dhoni were responded with wickets by Vinay.

“Dhoni is a great believer and he kept on backing. Once I spoke to him, he said ‘I won’t believe on pace because if you have skill, it is more than enough. If you bowl in the right areas, you will definitely be difficult for the batsmen to hit’,” Vijay said.

Without Dhoni’s backing, it’s a moot point if Vinay would still be in the mix for coach Duncan Fletcher is an avowed fan of express pace and doesn’t see any logic in investing in medium-pacers.

Vinay’s strength has been his outswingers but his repertoire has constantly grown over the last few seasons.

There are now leg-cutters and excellent slower deliveries, not to speak of a few which he can now also bring in to right-handers without any discernible change in action.

Always experimenting, he once copied Lasith Malinga’s slinging action to claim Adam Gilchrist in IPL. Interestingly, he has never tried this trick on a one-day field.

“IPL is such a format where bowling one dot ball is very crucial. I just tried that new action to bowl a dot ball. I never had it in my mind to get a wicket with that ball. I am lucky that I got Gilchrist with it,” he said.

“In T20, you should do some different things. That format is good for that, but in one-dayers you should keep it simple,” added Vinay.

It has helped Vinay that one-dayers these days are played with two new balls at two ends. It allows newer balls to swing for longer overs and provides extra help to exponents of swing bowling.

“For me, it’s actually helping because I am a swing bowler. Normally, the white ball won’t swing for more than six to seven overs. Very rarely will it swing until the 10th over. Using two new balls at both the ends, it will swing for 10-12 overs,” Vinay said.

The 28-year-old has been lucky that he had mentors in Anil Kumble and Rahul Dravid when he first broke into the first class circuit in 2004-05.

He was further aided by the presence of India spearhead Zaheer Khan in Royal Challengers Bangalore in the IPL.

“When I played my first IPL for Bangalore, Zaheer was there and helped me a lot while bowling in the middle,” he said.

Later Vinay was also benefitted by the presence of Praveen Kumar in his IPL team.

From a journeyman, Vinay is now a star and not just in the IPL circuit where he would play its fifth edition as a million-dollar cricketer. (PTI)