Dhoni is ranked 22nd with total earnings of USD 30 million and endorsements worth USD 26 million.

Dhoni is ranked 22nd on the list with total earnings of USD 30 million and endorsements worth USD 26 million. His salary and winnings total USD four million as of June 2014, Forbes said.

“Dhoni cemented his legacy as one of India’s best captains of all time when he led the Indian national team to victory in the 2013 ICC Champions Trophy and became the first national captain to ever win all three ICC trophies,” the publication said.

Dhoni signed bat sponsorship deals with leading brands like Spartan Sports and Amity University in late 2013 reportedly worth a combined USD four million annually, up from the USD one million Reebok was paying previously, it added.

The earning figures include salaries, bonuses, prize money, appearance fees, as well as licensing and endorsement income paid out during the last 12 months between June 2013 and June 2014.

Mayweather earned USD 105 million during the past year for 72 minutes of work in the ring for fights against Canelo Alvarez and Marcos Maidana. The payday puts Mayweather at the top of Forbes’ annual list of the world’s highest-paid athletes for the second time in three years.

Developers plan to open a new course in Cabo San Lucas, Mexico this year which will be the first completed Woods-designed course. Federer, who holds the record for most singles Grand Slam wins (17) and career prize money (USD 81 million) is ranked seventh on the list with earnings of USD 56.2 million.

“Federer continues to be among the world’s best players 16 years after he turned pro. His sponsors collectively pay him more than USD 40 million annually,” Forbes said. 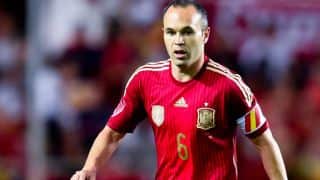