India have won both their matches in the Asia Cup T20 216 so far.

India skipper MS Dhoni believes that the low-scoring pitches at Mirpur Dhaka are not an ideal way to prepare for the ICC World T20 2016, which begins on March 8 in India.  He added that that the pitches are not fit for T20s. The Indian bowlers bowled Pakistan out for just 83 onside 18 overs and lost five wickets chasing Pakistan’s low score. But Dhoni is clearly disappointed despite his team’s back-to-back wins in the Asia Cup T20 2016 so far. We scored 166 in one match but frankly we were going to score 140,” Dhoni said. “Other than that there have been low-scoring games which I feel is not that good. We thought it would be good practice ahead of the World T20, so it’s not a good practice in terms of hitting but yes in terms of respecting the conditions.”  Full Cricket Scorecard: India vs Pakistan, Asia Cup T20 2016 Match 4 at Dhaka

Dhoni then went on to say that teams should at least be able to score 130-140, which in his eyes in a low score and not below 100. “The reason why people love T20 is the sixes and fours,” Dhoni said. “At the same time you don’t want [teams scoring] 80s and 100s. Low scoring should be 130-140 and high-scoring can be 200 or 240. In a way, it’s good for us because we are a side that plays aggressive cricket. What it does, it pushes us to respect the conditions. In the coming games the openers won’t go with a set mindset,” Dhoni added, according to espncricinfo.com. READ: Virat Kohli’s genius trumps Mohammad Aamer’s brilliance as India beat Pakistan by 5 wickets in Asia Cup T20 2016

“What happened in Australia, we knew the wickets were good, which is not the case here. I feel it’s good practice for us. Whether it is good for T20 cricket that’s difficult [to say]. The amount of movement we have seen, it is very difficult to get the big shots.” 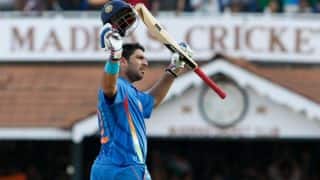 Yuvraj Singh documentary likely to be released in 2017 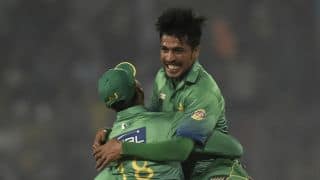