India captain MS Dhoni attributed his side’s 72-run loss to Australia in the first One-Day International (ODI) in Pune on Sunday to the lacklustre performance by his pacers and poor shot selection by his batsmen. 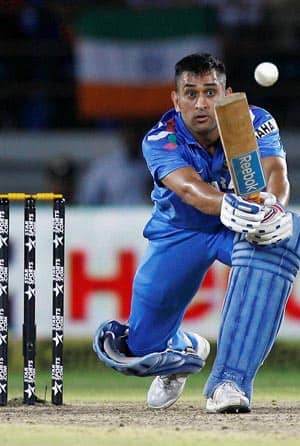 India captain MS Dhoni attributed his side’s 72-run loss to Australia in the first One-Day International (ODI) in Pune on Sunday to the lacklustre performance by his pacers and poor shot selection by his batsmen.

“The way we started, we weren’t able to build partnerships. We should have got closer. I am disappointed with the shot selection of our batsmen today (Sunday). Once you are set it’s important to carry on,” Dhoni said after the match.

“We were in a decent position to chase down and at one point the game was 50/50. It was important the batsman carried on till the Powerplay. We could have done that but we played shots that were not really intended. That harmed us,” he said.

“It’s important that when we chase we have to make solid partnerships, especially between the 25th and 35th over and you can’t lose any wickets at that period,” he added.

He said considering the wicket in Pune, lack of genuine fast bowlers had hurt his side.

“We don’t have genuine fast bowlers, we have more swing bowlers, so we couldn’t generate the bounce that the Australian bowlers did. The bowlers had to hit the deck from the start. If you can dig it in, you get extra bounce,” he reasoned.

Defending his spinners, Dhoni said, “The spinners did well, though, when we finished off [the Australian innings], we gave too much runs away.”

“It was a fantastic all-round performance. We spoke about that before the game. We had to do that right through the series, and get contributions regularly, if we wanted to beat India in this series,” said Bailey who was also adjudged the Man-of-the-Match for his 82-ball 85 in his side’s innings.

Bailey praised his bowling for tying down the Indian batsmen.

“There were a couple of times India got on top, but to our bowlers credit, our bowlers found a way to fight back. Mitchell Johnson has been really impressive over the last couple of months, and was impressive in England too. He definitely gave us a great start,” he said.

He also heaped praised on his batsmen for piling up a mammoth score of 304 for eight.

“Yeah, putting on 300 was really good and we had contributions right down the order. The 100-run stand set a great platform, and Glenn Maxwell provided great impetus in the middle, with James Faulkner and the bowlers hitting well at the end,” he said.

“It was important to have even contributions through the order. We were looking at 300 from the start so it was important we started well. But it is going to be a bit of a war of attrition this series, so now on to the next one,” he added.